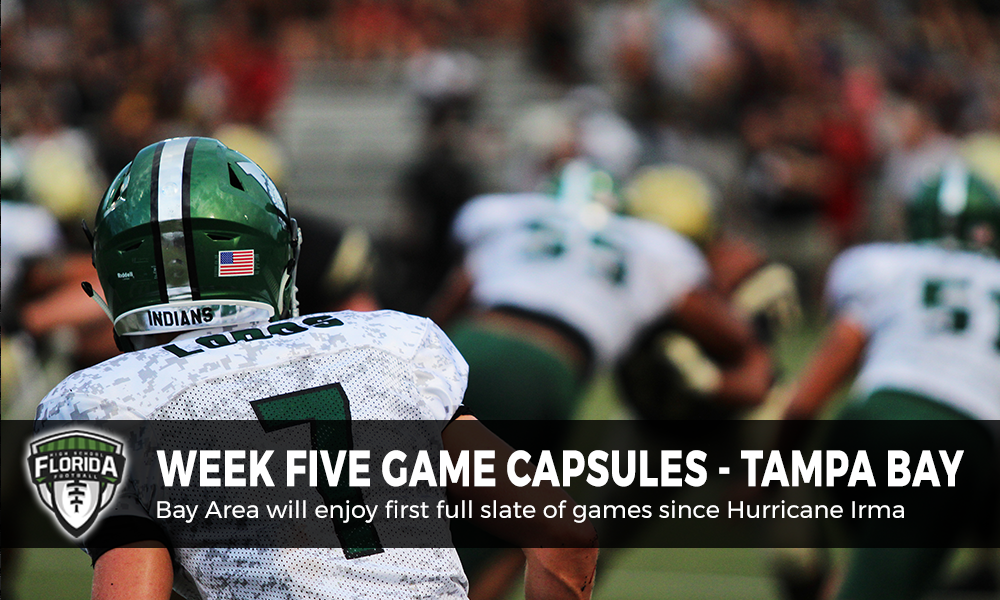 Just as the rest of the state, the Tampa Bay area is returning to normalcy after the wrath of Hurricane Irma two weeks ago. For the first time since the beginning of the month, the Bay Area has a full slate of Friday night football.

Here are some previews on some of the games around Tampa Bay:

This Pasco-Pinellas matchup is one with much intrigue as two defending district champions face off at Jack White Stadium in Clearwater. Mitchell (New Port Richey) has allowed just 16 points all season, allowing fellow Pasco-power River Ridge to just three points on September 1. The Mustangs have compiled four interceptions in three games, two from Adam Rogers and two from Stephaun Peters. Mitchell also has 16.5 sacks, including 4.5 from Luis Rivera. Clearwater’s offensive line will have to give QB Colin Wray plenty of time to stay out of trouble. The Tornadoes come into tonight having defeated cross-town rival Countryside 35-14, where Wray passed for two touchdowns to Quante Perry.

Hernando (Brooksville) hasn’t played since September 1 when they knocked off Seven Rivers Christian (Ocala) 27-7. How they play tonight could be a big indicator of how the Leopards will play the rest of the season. Hernando’s run-heavy attack will be on display – as a unit, the Leopards have 772 total yards and nine touchdowns. The emphasis will be getting Israel Fields the ball, who leads the team with 312 rushing yards. Josh Vonada has two interceptions in two games – he’ll be one to watch in the secondary. Citrus picked up its first win of the season with a 24-14 win over Crystal River in district play.

It’s been a minute for Armwood (Seffner). The Hawks have had almost a month off from football and finally get a chance to take out their frustration in a fast and furious game this evening. This will be the first time 2014 that the Hawks and Dragons have squared off – Armwood won convincingly, 42-0 in that game. Ohio State-commit Brian Snead has 158 rushing yards to his name so far this year, while Devin Black has thrown for 166. Oregon-commit Malcolm Lamar and Fitzroy Gardner will look to pressure Jefferson (Tampa) QB Matt Gaffney, who is 22-for-35 with 436 yards. He has thrown two interceptions and only one touchdown. Niko Duffey has done the majority of the work on the ground with 333 yards, while Dontavius Smith has 206 receiving yards. Jefferson’s defense has compiled 12 sacks on the year.

Friday night will go a long way to see if Palmetto will contend for a district championship in 7A-11 at the end of the year. The Tigers looked like a well-oiled machine against Manatee two weeks ago in a 35-7 blowout. The only loss on the record? An 11-10 loss against Riverview (Sarasota) that could have gone either way. Elijah Davis is a talent at the running back spot, and the Tigers will ride on his back to success. Lake Gibson (Lakeland) is another team that hasn’t played in close to a month, so Friday could be either really good or really bad. Knowing Doug DeMyer, he won’t let the latter happen. This will be a hotly contested game on the north side of Lakeland.

This is the first 0-3 start for Sunlake (Land O’Lakes)…in a while. Since 2007, to be exact, in Sunlake’s first year of existence, when the Seahawks went 0-10. The 2017 ‘Butter Bowl’ is a must-win for Sunlake. Not just to have a shot to make the playoffs, not just to turn the season around, but it’s a must-win in Land O’Lakes. Sunlake has won seven in a row and leads the all-time series 7-3. Bryant Beacham leads the Seahawks with 257 rushing yards. The Gators lost 27-20 against Anclote in their last game and will look to bounce back. Ethan Forrester has thrown for 202 yards with two touchdown passes to Tylor Winn. Five different Gators have recorded a sack so far in 2017. These two teams don’t like each other, so expect a hard played game by both sides.

Some are beginning to wonder if the Marauders will concede another point. CCC has pitched two consecutive shutouts, one against Booker (Sarasota) and the other against Tampa Catholic. Northeast (St. Petersburg) shut out Seminole and then dropped a 24-15 decision against Pinellas Park. Rory Hicks (transfer from Countryside) has looked good in his first year as the Marauders’ starter, throwing for 346 yards in three starts. The Newton brothers, Johnny and Jerjuan have a combined 466 total yards and are a tough one-two punch for any defense.

Joe Pinkos has this game as a 35-point blowout in favor of Lakeland. East Lake-Lakeland will be much closer. East Lake (Tarpons Springs) is currently 43-43 in points allowed-conceded, which is a result of a one-point win over Palm Harbor University and Pinellas Park and then a two-point loss in a stunner against Largo. Breon Hillmon is a stud at running back and can bang in between the tackles for tough yardage. On the flip side, Demarkus Bowman of Lakeland is coming off of a 173-yard game against Apopka on September 8. He has 321 yards with six touchdowns. East Lake may have a tough time getting used to the rowdy environment that is Bryant Stadium, but Bob Hudson’s boys will fight all night.

There hasn’t been quite a game for Bryce Carpenter as there was in the preseason when he scored six touchdowns in the Kickoff Classic, however, he’s still compiled 505 total yards en route to a win over Camden County (GA) and Riverview (Sarasota). Carpenter has connected with fellow Coastal Carolina-commit Jaivon Heiligh 17 times for 181 yards and two touchdowns. They’re a dangerous pair. Noah Carr has two interceptions for the Indians this season. Dunbar comes in with Keanu Young having run for 362 yards on 33 carries, averaging just over 11 a carry. The Tigers had a big win over Charlotte in week one, and then they took down Lehigh on August 31 – the last time they played.