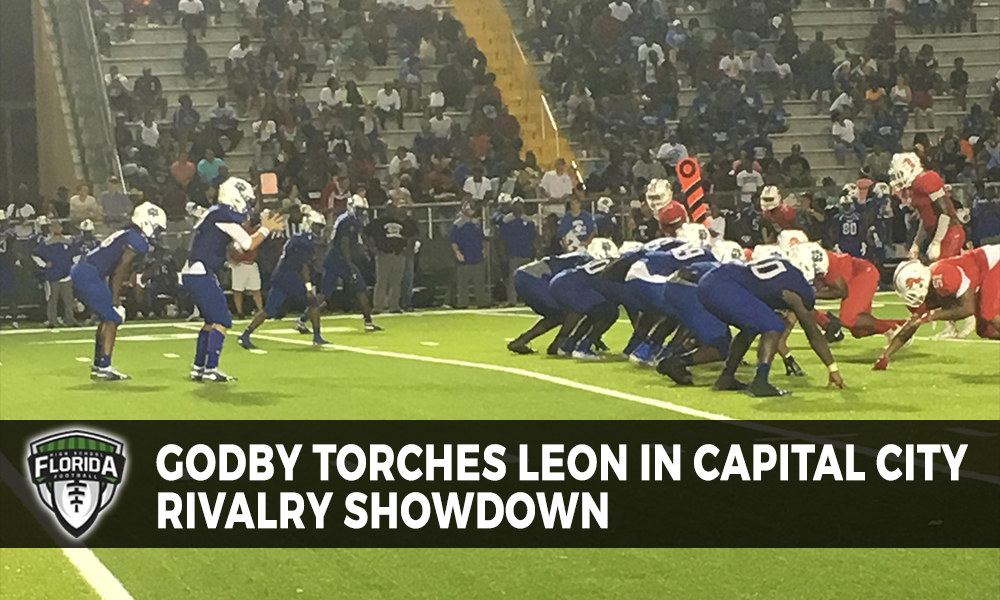 TALLAHASSEE, Fla. – Another chapter in the historic cross-town rivalry was written on Friday night when the No. 14 Godby Cougars faced off against the Leon Lions at Gene Cox Stadium. Despite the heightened emotions and familiarity with the opponent, the heavily-favored Cougars dominated from the start, beating their Capital City rivals convincingly, 57-0.

Here at at Gene Cox Stadium in Tallahassee, covering the Leon-Godby game that kicks off in just under 30 minutes. Make sure to check back here for regular update.

Leon won the toss and chose to receive the opening kick driving down the field into field goal range. However, despite a good effort by the kicker Zach Treadway, the kick missed allowing Godby to have a chance to score first in the game. Trey Fisher led the Cougars down the field, and junior running back Tyriq Parramore ran it in to put the Cougars up 6-0 early in the first quarter.

Godby goes up over Leon after a long 3rd down conversion by Trey Fisher, follows by a TD run.

Leon’s next possession went much better and the Lions drove down the field, but Godby intercepted a pass to give the Cougars the ball back. With that possession, junior quarterback Trey Fisher took over from there, and after a quick drive, found receiver Jaheim Knight on the sideline, who tip-toed down the field on a fourth-down conversion for the score to make things 12-0 halfway through the first quarter.

Despite the slow start, the Leon offense did try and make things competitive with Godby. Quarterback Paxton Tomaini led the Lions on yet another drive that seemed promising, but after some good running and key throws, the Cougars stopped the Lions in their tracks again with a C.J. Williams interception.

With the ball back in Godby’s possession, the first play of the drive saw Alvin Jones III take a short screen pass and collect several pairs of ankles on the way to a 52-yard touchdown towards the end of the first quarter, taking an 18-0 lead.

Godby scores again after a pick by CJ Williams and then a screen pass that goes for 6. @GodbyFootball up 18-0 over Leon with 19 seconds left in the 1st@FlaHSFootball #flhsfb

After a first quarter where the Leon offense seemed to continually shoot themselves in the foot, there seemed to be nothing they could do after that to get any sort of offense going. Defensive back Christion Williams led the way with two interceptions for Godby, while any hope of a running game for Leon was shot down by defensive tackle Quinten Jones, who seemed to live in the Lion backfield all night.

Touchdown runs by both Kamron Martin and Jaquez Yant put Godby up 30-0 over the Lions. After stopping yet another Leon drive, Fisher led the Cougars down the field and found receiver Macho Arza for a quick touchdown to end the half with a 37-0 lead over Leon. In just two quarters, Godby amassed over 300 yards of total offense, 214 of which were courtesy of Fisher, who accounted for three of the touchdowns scored.

Coming out of halftime, despite trailing by more than five touchdowns, there was no quit from an exhausted Leon squad.

Senior linebacker Joshua Seabrooks seemed to be all over the field for the Lions and forced Godby into fourth and long multiple times throughout the contest. Wyatt Adam, a receiver and long snapper for Leon gave the Lions faithful hope by drilling a Godby returner on a punt return forcing a fumble, which was recovered by Leon. Sadly, for the Lions, nothing good came out of the play, as the officials ruled it was ‘unnecessary roughness’ forcing Leon to re-punt.

That would be the last time Leon fans had anything to root for the rest of the night. Fisher tossed his fourth touchdown of the night to Jones III and after a Leon punt, Tyriq Parramore made things 50-0 going into the fourth quarter.

With a running clock and game well-in-hand, Godby took their feet off the gas, scoring just seven points during the final period to a 57-0 victory.

Cougars move to 4-0 on the season, Leon drops to 2-2@FlaHSFootball

Player of the Game: Players on both the Godby offense and defense make good cases for this award, but ultimately, Trey Fisher had a fantastic game for the Cougars on Friday. He completed over 70% of his passes while throwing for four touchdowns in just three quarters and passing for over 300 yards. Fisher now has thrown for 12 touchdowns and over 1,000 yards this season in just four games. Receivers Macho Arza and Alvin Jones III also deserve shoutouts for stellar games, as does running back Tyriq Parramore, as well as the entire Cougar defense, for playing an almost perfect game.

What’s Next: Godby, ranked No. 14 in the FloridaHSFootball.com Sunshine State Top 25 rankings is now 4-0 and faces off against Titusville at home in Tallahassee next Friday night. The Terriers are 0-4 coming into the matchup after falling to Palm Bay, 49-19.

Leon, now 2-2 on the season, will travel to Kissimmee to next Friday night to take on Gateway. The Panthers are riding high following back-to-back wins against St. Cloud and Haines City.