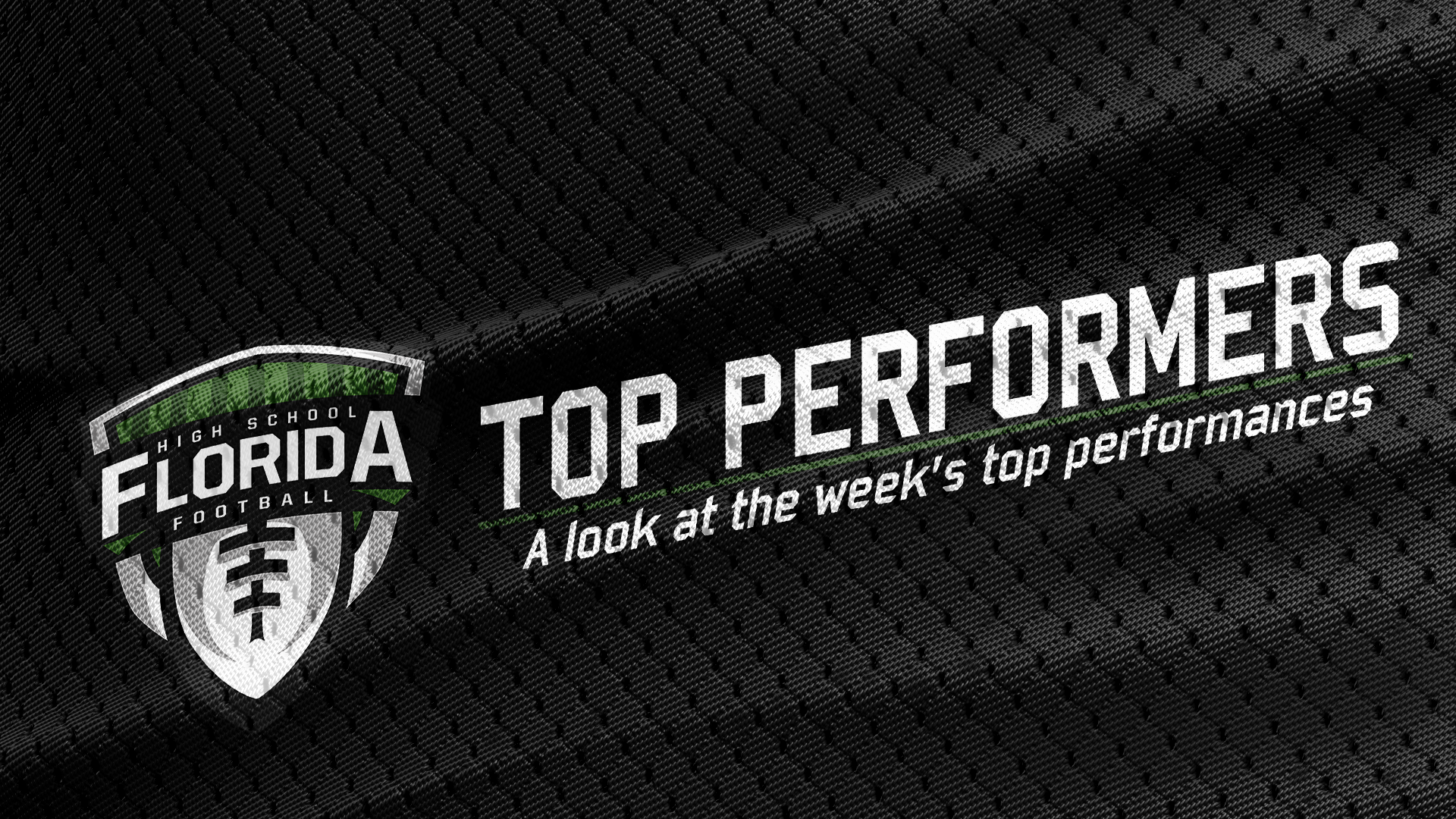 Without further ado, here are Week 2’s top performers for the 2019 season:

QB Joe Nieves, Nease – Had 452 yards passing and six touchdowns, plus one more rushing touchdown in a 58-51 heartbreaking loss to Creekside.

DB Uriel Richardson, Mandarin – The defensive back had two pick-sixes for the Mustangs in their 32-13 win over Ribault.

DE Le’Vontae Camiel, Columbia – The defensive end has 10 tackles, half a sack, forced a fumble and came up huge in stopping a two-point conversion in the Tigers’ 21-19 win over Oakleaf.

QB Will Koch, Niceville – Had over 220 yards of offense (114 rushing, 108 passing) and had three total touchdowns (two passing, one rushing) in the Eagles’ 41-0 shutout of Choctawhatchee.

WR Keedrik Murray, Clearwater – Set a school record for receiving yards in a single game with 238 yards and scored three touchdowns in the Tornadoes 44-12 win over East Lake.

WR Michael Olkiewicz, Ponte Vedra – The wide receiver had 203 yards receiving and three touchdowns in a 40-7 blowout win over Zephyrhills.

QB Logan Rogers, Port Charlotte – Accounted for all three of the Pirates’ touchdowns (two passing, one rushing) while having over 230 yards of offense (174 passing, 60 rushing) in a 21-14 win over Hardee.

QB Tony Bartolo, Gaither – Threw for 197 yards and four touchdowns in the Cowboys’ 35-28 upset of Plant.

RB Alex Collier, Orange Park – Had 337 all-purpose yards, plus one touchdown for the Raiders in a 29-21 win over Middleburg.

RB Dwayne McBride, Vanguard – Had 16 carries for 205 yards rushing and scored two touchdowns in the Knights, 41-12 win over Buchholz.

RB Ladarius Tennison, Rockledge – Scored three rushing touchdowns for the Raiders in their 34-20 win over Lincoln.

DE Tramel Logan Jr., Booker T. Washington – The defensive end had a huge game in a 32-29 loss to Miami Central, collecting 10 tackles (six for loss) and a sack.

RET DJ Taylor, Tampa Catholic – Had two kick returns (one punt return for 75 yards and a kickoff return for 95 yards) for touchdowns in the Crusaders’ 55-14 win over Cardinal Mooney.

WR Troy Stellato, Cardinal Gibbons – Had six catches for 125 yards and a touchdown in the Chiefs’ 23-21 win over Miami Palmetto.

QB Carson Haggard, Gulliver Prep – 16 of 20 passing for 262 yards and four touchdowns in the Raiders’ 45-16 win over Belen Jesuit.

WR Anthony Ballard, Discovery – Had 176 yards receiving on six catches and scored three touchdowns in the Spartans’ 34-30 come from behind victory over The First Academy (Orlando).

QB Willie Taggart Jr., Florida High – Threw for 239 yards and three touchdowns while rushing for one touchdown in a 52-12 win over Taylor County.

RB Anson Rodriguez, Taylor (Pierson) – The running back rushed for 238 yards and three touchdowns in a huge win Bronson.

QB Rich Mellien, First Baptist (Naples) – The freshman quarterback went 7 of 10 passing for 159 yards and two touchdowns, plus carried the ball seven times for 126 yards and three touchdowns in the Lions’ 47-14 win over Hudson.

RB Tyler Davis, Zephyrhills Christian – 24 carries for 158 yards rushing, scoring two touchdowns in for the Warriors in a 20-8 win over West Oaks Academy.

QB Visonta Allen, Madison County – Returned a punt for a 90-yard touchdown, went 5 of 7 passing for 93 yards and three touchdowns and had 11 carries for 81 yards and a touchdown in the Cowboys’ 55-0 win over Jefferson County.

LB Trevor Holtzendorf, Union County – The linebacker collected 14 tackles, two sacks and forced a fumble in the Tigers’ come from behind 15-12 win over Williston.

RB Brandon Siples, Freeport – 201 yards rushing on 22 carries to go along with three touchdowns in the Bulldogs’ 19-7 win over Holmes County.

RB Calvin Stringer, Sneads –Had  11 carries for 209 yards rushing and three touchdowns in the Pirates’ 44-9 win over Liberty County.

QB Jayden Hernandez, Gateway Charter – 20 of 32 passing for 291 yards and tossed four touchdowns in the Griffins’ 46-13 win over Jupiter Christian.

Jordan Christian Prep Defense – Forced six fumbles on Avon Park, recovering three of them in a game won by a safety, a 2-0 shutout.

QB Dylan Oester, Dunedin – Went 10 of 13 passing for 204 yards and threw three touchdowns in the Falcons’ 26-6 win over Osceola (Seminole)