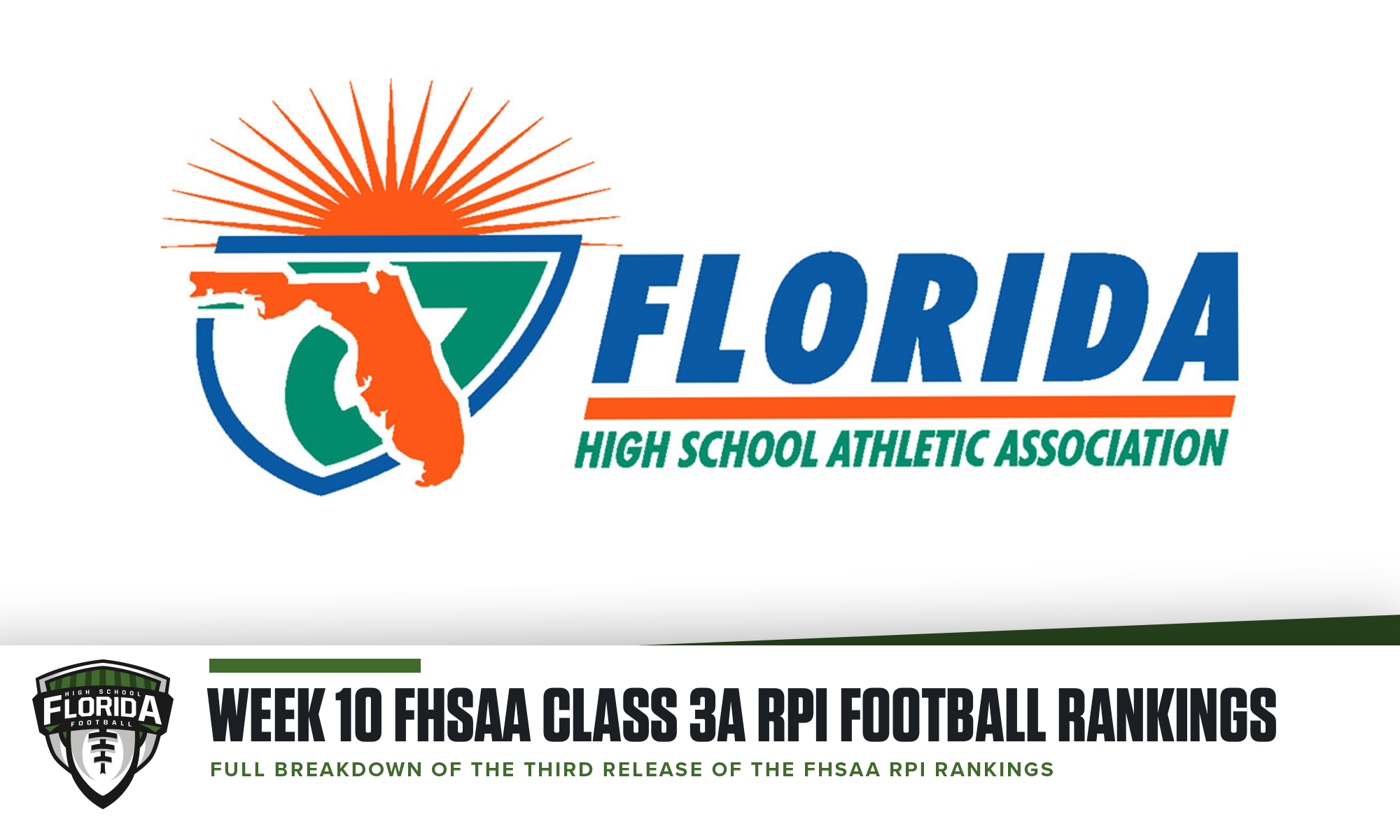 GAINESVILLE, Fla. – Nine weeks are in the books for the 2019 Florida high school football season and the FHSAA has given us another round of updated RPI rankings meaning we are another week closer to the playoffs.

No. 1 Pensacola Catholic
No. 2 Trinity Catholic
No. 3 Florida High
No. 4 Episcopal
No. 5 Baldwin
No. 6 Trinity Christian (Jacksonville)

No. 1 Pensacola Catholic – BYE
No. 5 Baldwin at No. 4 Episcopal
No. 6 Trinity Christian (Jacksonville) at No. 3 Florida High
No. 2 Trinity Catholic – BYE

QUICK THOUGHTS: A lot of shuffling in the region again this week with Baldwin falling from the No. 2 seed down to the No. 5 seed after their loss to University Christian. Trinity Catholic benefits greatly from their victory of Victory Christian going from the No. 5 seed to the No. 2 seed. Florida High and Episcopal trade places among the No. 3 and No. 4 seeds, while Trinity Christian may have a hold on the No. 6 seed after getting a solid victory over Robert E. Lee last week.

No. 1 Lakeland Christian
No. 2 Holy Trinity
No. 3 The First Academy (Orlando)
No. 4 Frostproof
No. 5 Father Lopez
No. 6 Taylor (Pierson)

No. 1 Berkeley Prep
No. 2 Bishop Verot
No. 3 Oasis
No. 4 Clearwater Central Catholic
No. 5 Cardinal Newman
No. 6 Benjamin

QUICK THOUGHTS: No changes among the top three teams in the region, but Clearwater Central Catholic got a huge boost moving from the No. 6 seed to the No. 4 seed in their region after picking up the win over NSU University School last week. Cardinal Newman and Benjamin both slide back to the No. 5 and No. 6 seeds respectively.

No. 1 Calvary Christian (Fort Lauderdale)
No. 2 Chaminade-Madonna
No. 3 Miami Edison
No. 4 St. Andrew’s
No. 5 Westminster Christian
No. 6 Somerset Silver Palms

No. 1 Calvary Christian (Fort Lauderdale) – BYE
No. 5 Westminster Christian at No. 4 St. Andrew’s
No. 6 Somerset Silver Palms at No. 3 Miami Edison
No. 2 Chaminade-Madonna – BYE

QUICK THOUGHTS: The top two doesn’t change, but seeds No. 3 through No. 6 change drastically with Miami Edison climbing from the No. 5 seed to the No. 3 seed while St. Andrew’s and Westminster Christian fall back to the No. 4 and No. 5 seeds. Somerset Silver Palms rises up to the No. 6 seed overtaking Palmer Trinity in the rankings.