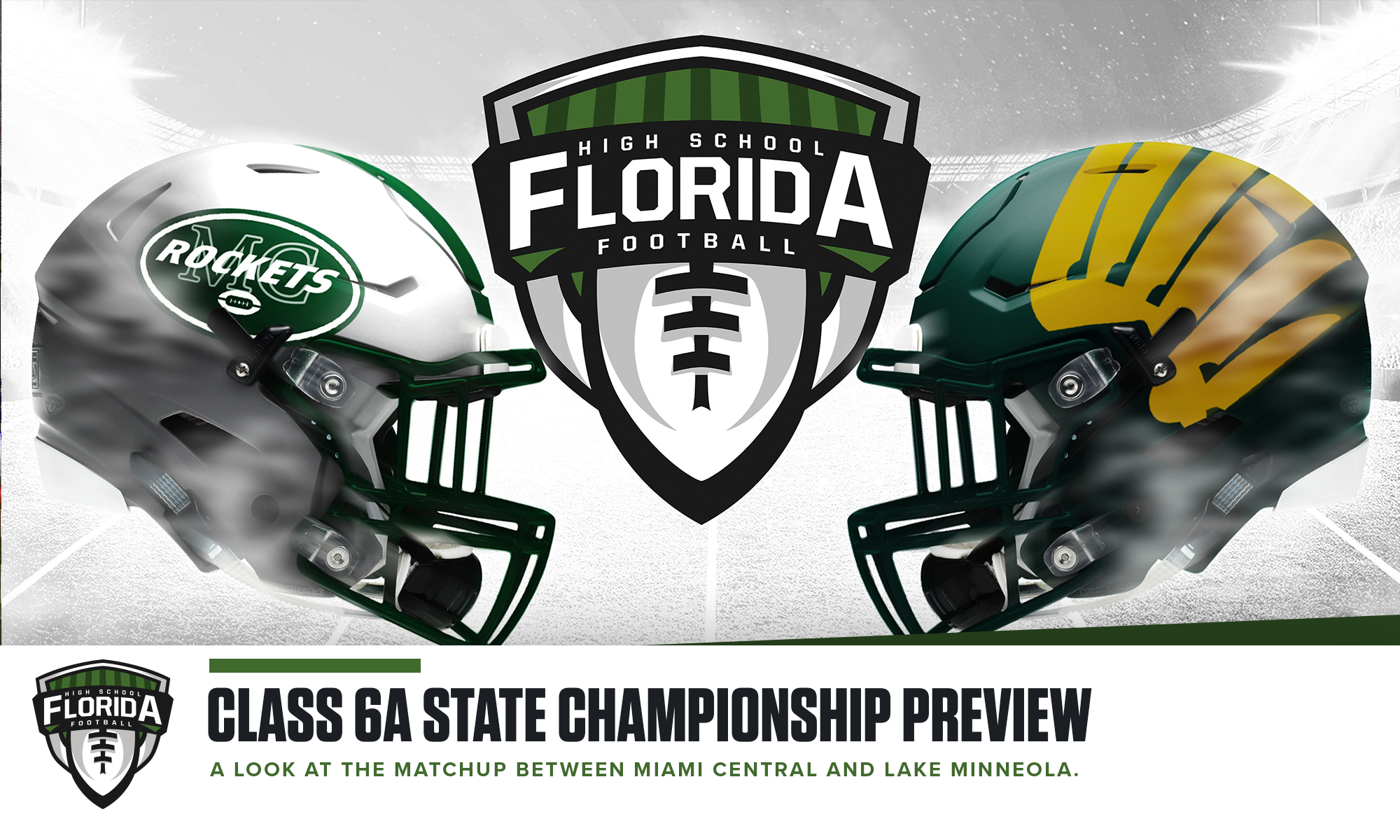 NOTES: This state championship game will mark the eight-time that Miami Central has been in a state championship game in the last decade which is quite an accomplishment going all the way back to 2010 when the Rockets won their first state championship in Orlando against Dr. Phillips in Class 6A, which was then the highest classification in Florida. … For Lake Minneola, this game represents their first trip into a state championship in school history, which has only been open since 2011 and now holds a 7-2 official record in the FHSAA State Series. … With no stats available from Miami Central, it is harder to go into detail about all the key weapons that they have standing out at this point stat-wise, but we can look back on their game last week where they defeated Palmetto, 47-20. … We will start with the man under center with sophomore QB Keyone Jenkins who had his breakout party against Palmetto going 16-of-22 passing for 366 yards and five touchdowns. In that game, he also had a rushing touchdown and did not have any interceptions. … On the ground senior RB Amari Daniels, a four-star, Texas A&M commit, has been the star of the show, but last week only had 111 yards rushing and a touchdown thanks to the game that Jenkins had in the air as Palmetto keyed on Daniels to shut him down. Another key guy that can do damage on the ground is senior ATH Yulkeith Brown who, like Daniels, is a four-star Texas A&M commit. As such, the ground game is tremendously helped by four-star Miami (FL) commit, senior OG Laurence Seymore who is in the top 10 for his position in the nation. … Defensively keep an eye on senior LB Terrence Lewis a five-star prospect who has multiple offers including those from Tennessee, Maryland, Florida, Alabama, and Auburn just to name a few. Also keep an eye on LB Rhody Jean-Lewis, a two-star prospect that holds several Division I offers as well as junior LB Wesley Bissainthe, who is a four-star prospect with over a dozen Division 1 Power Five offers including Alabama, Florida, and Miami (FL) being the leading contenders. … For Lake Minneola, expect the ground attack to be the focus offensively for the Hawks and that starts behind the talents of RB Sidarius Walker who has 1,644 yards rushing on 230 carries and 21 touchdowns in all 12 games played. … Now the Hawks do have a passing attack they can use if needed, and that falls into the hands of senior QB Robbie Sanders, who is a two-star Army commit. Sanders is 62-of-93 passing for 920 yards and has thrown 17 touchdowns compared to just two interceptions. Sanders also has 101 carries on the ground for 684 yards rushing and 11 more touchdowns. As such, that makes Sanders a dual-threat for any opposing offense with the quickness of his feet. … Defensively, the leading tackler for the Hawks is DT/LB Drake Howell who has 50 tackles (17 solo) and eight tackles for loss as well as collecting three sacks. … The sack leader for the Hawks is junior DL Brendan Flakes who has five sacks to go along with 22 tackles and eight tackles for loss.