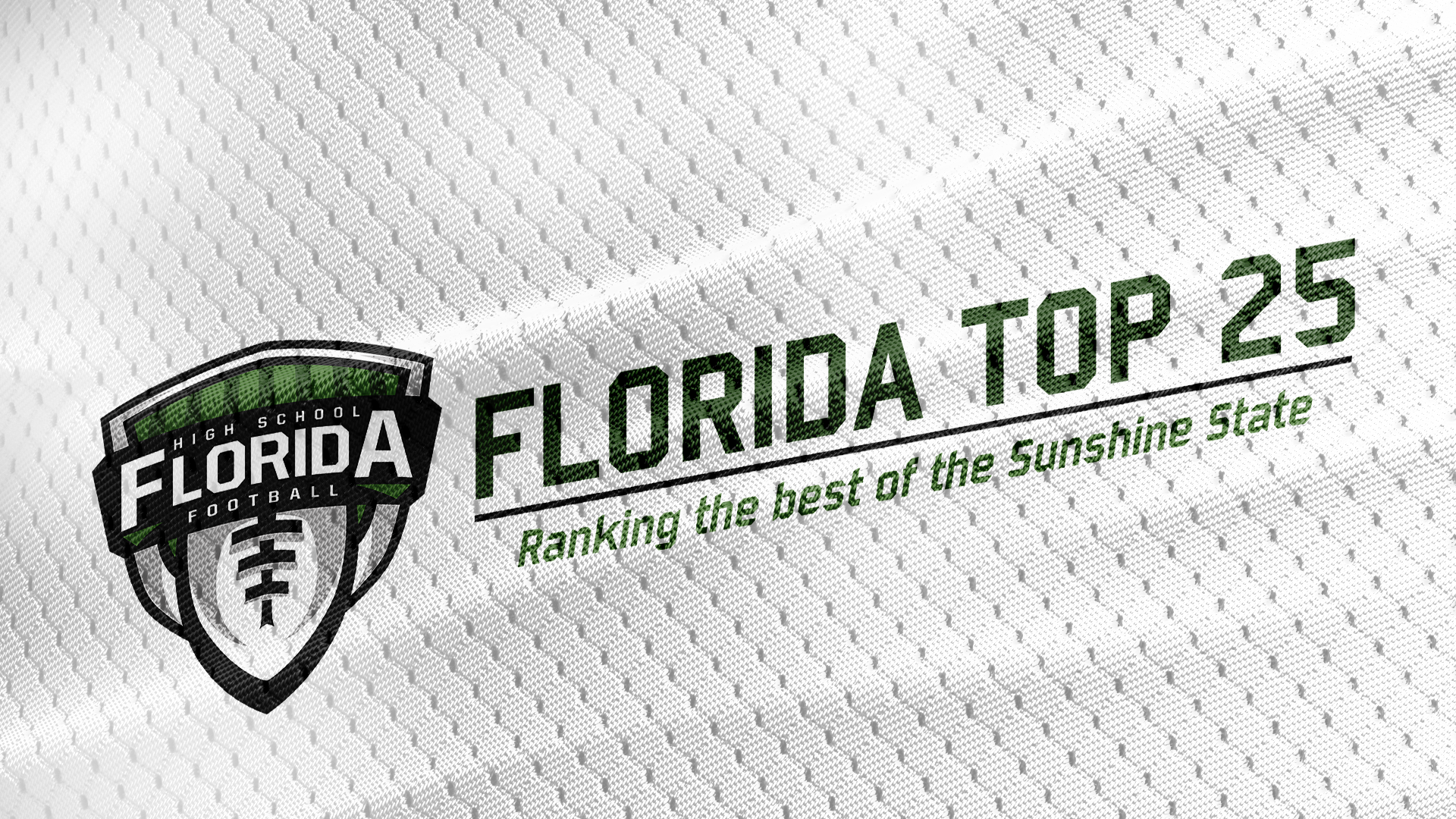 It was an interesting Week 2 for the Florida Top 25 as a couple of teams were not able to play their scheduled matchup while seven Florida Top 25 teams lost their games this week.

Several Florida Top 25 teams saw their Week 2 games canceled thanks to the threat of Hurricane Dorian.

No. 2 St. Thomas Aquinas was original suppose to host nationally-ranked Bergen Catholic from New Jersey, but without the ability to move flights up and fear of getting stuck in Florida, it was agreed upon to cancel the game with no reschedule planned. That leaves the Raiders with 8 games to qualify for the playoffs on under the FHSAA’s new RPI playoff formula.

No. 24 Western saw their Freedom Bowl matchup with UMS-Wright Prep out of Alabama canceled as well thanks to Hurricane Dorian. As such, no makeup will happen and will leave the Wildcats with nine games to quality under the RPI playoff formula.

North Gwinnett, Ga. 26, No. 5 Armwood 23 (2OT) – The visiting Hawks exchanged leads with the host Bulldogs a couple of times in the second half after trailing 3-0 at the half. Armwood (1-1) would tie the game at 17-all to force overtime, but two field goals in the two overtime periods would not be enough as North Gwinnett (1-1) would run a trick play for the game-winning touchdown, according to the Atlanta Journal-Constitution UP NEXT: Armwood will travel to Valrico to take on Bloomingdale (2-0) next Friday night.

NO. 5 ARMWOOD LOSES A TOUGH ONE IN DOUBLE OT ON THE ROAD IN GEORGIA North Gwinnett (GA) 26 Armwood 23 FINAL (2OT) #flhsfb

Gonzaga, D.C. 33, No. 6 American Heritage (Plantation) 14 – The Patriots were one of two teams to make a trip to the nation’s capital this weekend to take on some of the top team in the nation. Gonzaga (1-0) which entered the week ranked No. 11 in the High School Football America 100 national rankings totally dominated the Patriots in from start to finish. American Heritage (1-1) scored all 14 of their points in the first half of the game. UP NEXT: American Heritage will travel to Miramar (1-1) for their Week 3 matchup next Friday night.

No. 9 Chaminade-Madonna 44, Hallandale 8 – The visiting Lions easily took care of business against the host Chargers behind Alex Law’s 135 yards passing and three scores on the way to a 44-8 win, according to the South Florida Sun-Sentinel. The Lions (2-0) also saw Thaddius Franklin rush for nearly 100 yards and a touchdown in the first half as well. Emmanuel Morency scored the lone touchdown for Hallandale (0-1). UP NEXT: Chaminade-Madonna hosts Miami Christian (0-1) next Friday night while Hallandale hosts South Broward (1-0).

No. 12 Mandarin 32, Ribault 13 – It wasn’t Carson Beck’s performance but the visiting Mustangs defense that helped get to No. 12 Mandarin’s second win on the season. Mandarin (2-0) forced the host Trojans into five turnovers on the night, according to The Florida Times-Union, that include a pair of pick-sixes to run by Ribault (0-2). UP NEXT: Mandarin hosts DeLand (2-0) next week while Ribault travels to No. 11 Trinity Christian (Jacksonville) (1-1).

NO. 12 MANDARIN GOES ACROSS THE RIVER AND TAKES CARE OF BUSINESS TONIGHT AGAINST RIBAULT! Mandarin 32 Ribault 13 FINAL #flhsfb

St. John’s College (DC) 52, No. 15 Deerfield Beach 30 – The Bucks managed to put up 30 on national powerhouse St. John’s College who is currently ranked in No. 3 by High School Football America 100 rankings. The loss moves the Bucks to 0-2 on the season. UP NEXT: Deerfield Beach will travel to Blanche Ely (2-0) next week as they seek out their first win of the season.

No. 16 Edgewater 56, Oak Ridge 0 – The host Eagles scored all 56 of their points in the first half of their game Friday night, sending a signal to Class 7A foes that Edgewater (2-0) means business. Canaan Mobley threw for 214 yards and three touchdowns as part of the offensive assault on Oak Ridge (0-2), according to the Orlando Sentinel. UP NEXT: Edgewater will host No. 20 Jones (2-0) while Oak Ridge will be off next week.

No. 18 Venice 44, St. Petersburg 0 – Visiting Venice (1-1) handed the host St. Petersburg (0-2) their second straight shutout on the season, rebounding after dropping their season opener to IMG Academy last week. UP NEXT: Venice will travel to Vero Beach (1-0) while St. Petersburg travels to Wiregrass Ranch (2-0) next Friday night.

NO. 18 VENICE REBOUNDS THIS WEEK WITH A SHUTOUT OF ST. PETERSBURG Venice 44 St. Petersburg 0 FINAL #flhsfb

NO. 20 JONES GETS A HUGE ROAD WIN IN GEORGIA. 40+ POINTS FOR THE TIGERS IN THEIR FIRST TWO GAMES THIS SEASON! Jones 47 Johns Creek (GA) 16 FINAL #flhsfb

Lowndes, Ga. 44, No. 22 Champagnat Catholic 14 – The host Vikings’ defense was too stout for the visiting Lions to overcome on the road in Valdosta. The only offensive touchdown for the Champagnat (1-1) came from Malik Rutherford with 5:33 left in the game after a route was poorly covered Lowndes (2-0), according to the Valdosta Daily Times. UP NEXT: Champagnat travels to Tennessee to take on state powerhouse Christ Presbyterian next Friday night.

NO. 22 CHAMPAGNAT CATHOLIC TAKES A HARD ONE ON THE CHIN TONIGHT IN VALDOSTA. Lowndes (GA) 44 Champagnat Catholic 14 FINAL #flhsfb

No. 25 Madison County 55, Jefferson County 0 – The visiting Cowboy dominated the host Tigers gashing them through the efforts of senior Vinsonta Allen, who threw for three touchdowns and rushed for one more, according to the Tallahassee Democrat. UP NEXT: Madison County travels to Gene Cox Stadium next Thursday night to take on Rickards (0-2) while Jefferson County will host North Florida Christian (0-1) next Friday night.